Mederic Turay (b. 1979, Abidjan, Ivory Coast) is a multidisciplinary storyteller who lives his art as a privilege and uses a plurality of techniques to create entities, sometimes figurative, sometimes abstract, which become the protagonists of his graphic stories.

Turay was raised in the United States in the 1990s, where he was introduced to hip hop music, graphic novels, and the works of Picasso, Van Gogh, and Basquiat. He returned to the Ivory Coast as an adult to pursue his art education, and travelled widely in Africa in search of source materials and inspiration.

Turay’s incandescent, vast canvases stage beguiling storylines of his global background and represent his effort to distill, through the performative physicality of painting, the essence of the contemporary human experience in our transational, post-colonial society.

Turay’s concept of “human with a capital H” is one that transcends racial, geographic and socio-political stereotypes. A descendant of the noble Akan people of West Africa, Turay also seeks to connect with his heritage by appropriating motifs such as ancestral masks and spiritual symbols.

The balance of life forces, symbolized by two complementary forms: the cross and the spiral, in a way his yin and his yang. The spiral, round and infinite, refers to the movement of the cosmos, the dynamism, the creative fertility. Conversely, the cross, rigid in straightness, symbolizes anchoring, stability and material concretization. It is most often in the eyes of his characters that he inserts these cosmogonic symbols. For him, balance in duality leads to happiness.

Turay’s multi-media surfaces pulsate with an eclectic, raw energy. His new body of work is more abstract and introspective, assembling coarse coffee grinds, sumptuous oil and acrylic brushstrokes, and locally sourced pigments to create a multisensory, cacophonous experience of depth. His images are so cosmic in scope that they require viewers to suspend their imagination to explore their nuanced juxtaposition of many contrasting energies.

The temptation to decode Turay’s complex and voluminous sampling of inherited traditions and new forms leads to a meditative plunge into his polyphonic story of existence. These images document his quest of truth seeking and urgently proclaim the power and necessity of painting in this global, mass media age. 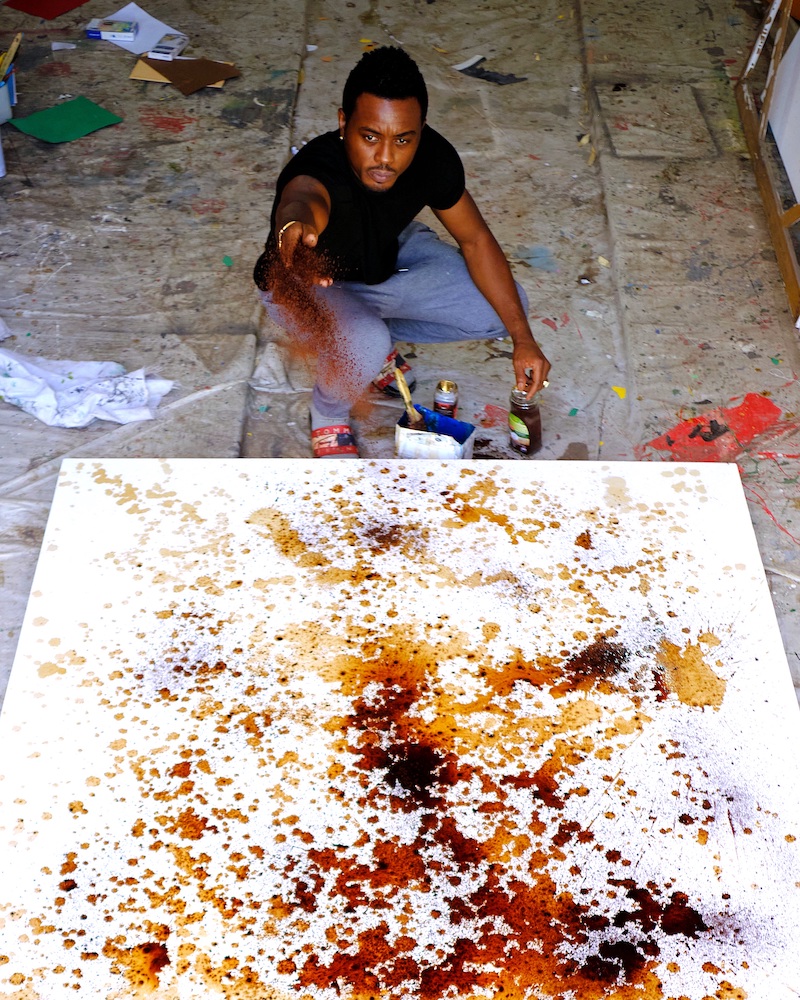